The Livestock Markets Association of Canada developed the Industry Champion Award to recognize individuals that have shown extraordinary leadership, promotion and involvement in the Canadian Livestock Marketing Industry.   Possible candidates are nominated to the LMAC board of directors and their nomination is reviewed.  Nominees do not have to be a member of LMAC.  Winners in the past have set the bar for dedication to the industry. Their work promoting true price discovery, livestock marketing and beef production business has benefited the Canadian cattle industry.

In the past 15 years there have only been three candidates that have been deemed worthy of this award.  It is truly LMAC’s most prestigious award. 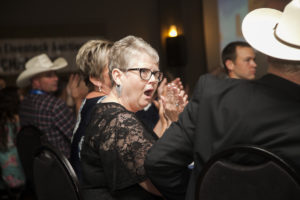 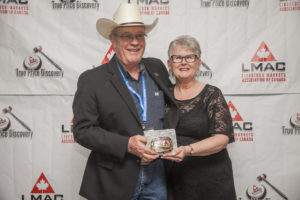 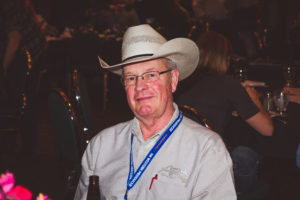 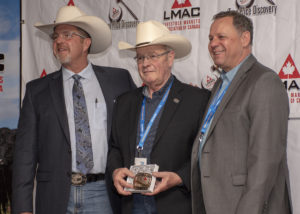 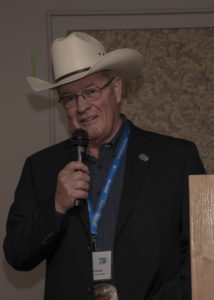 For only the third time in LMAC history, a new Industry Champion was recognized by LMAC in 2019.

Brian Good from the Canadian Angus Association was presented with a custom-made belt buckle and the title Industry Champion at the LMAC awards banquet in Nisku, Alberta during the LMAC Convention.

Brian Good’s duties with CAA include being a liaison with the auction markets, promoting the Angus breed and coordinating special Angus feeder sales.   He has been the “Face of the Angus Association” at auction markets across Canada for over 25 years.

Brian has rarely missed an LMAC convention and was the first breed representative to be asked to judge at the Canadian Auctioneering Championships.  His involvement with the LMAC Championships goes back to the beginning.  He approached Rick Wright on the convention committee and posed the question, “Why does Canada not have a championship competition for the livestock auctioneers like the Americans do?”   Wright wondered the same and took Brian’s question to the board of directors.   Brian offered a sponsorship from the Canadian Angus Association and offered to talk to the other major Breed Associations on behalf of LMAC.

The very first Canadian Livestock Auctioneering competition was held that year in Winnipeg with five major breeds on board as sponsors, thanks to Brian Good.  Since that time there have been 22 champions crowned from across Canada.  Brian has continued as the liaison between LMAC and the Breed Associations, raising over $110,000 dollars in sponsorships for LMAC.  Brian and his wife Lynanne have been volunteers and attendees at many LMAC conventions.

Brian Good has been a great promoter of “Price Discovery by Public Auction” across Canada.  He travelled worldwide promoting Canadian cattle and the Canadian cattle industry.   He has worked on many committees and freely offers his time to promote Canadian cattle production, genetics, feeding and marketing.

Brian has earned the respect of his peers wherever his travels take him.  His support of the auction industry with both commercial and purebred breeders has benefited LMAC and its members.  He has developed an incredible network of contacts during his career and is never afraid to pick up the phone and ask a question or offer an option if asked.

Even though the Angus Association employs Brian, he recognizes the benefits and strengths of the other breeds and has been an outstanding industry partner for LMAC.

LMAC takes great pleasure in recognizing Brian Good for his outstanding contributions to the Canadian Livestock Industry and to LMAC and its members.