Visionary, Creativity, Leader are all words that describe Jim Wideman.

Status Quo is a word that is not in his vocabulary. He thinks outside of the box and challenges those around him to do the same. When people say Why? He  says  Why Not?

Jim was born in Waterloo County, a productive farming area in the southern tip of Ontario. He grew up on the family farm with seven siblings. His parents taught him the value of hard work and education. Jim’s father served on the local school board and was the chair for many years and it was from his father that Jim first  learned the importance of community service.  Jim attended Bricker Public school, Elmira District Secondary school and then received his Bachelor of Arts degree with Honors from Wilfrid Laurier University in Waterloo.

In 1973 Jim and  two other partners purchased a local livestock auction market known as Waterloo County Stockyards. Several years later they merged with another auction company, Kitchener Stockyards and formed Ontario Livestock Exchange Inc. Jim became the Assistant General Manager and was soon put in charge of the design and construction of a new auction market facility, which opened in April of 1975 and had 6 auction rings operating simultaneously. In 1977 Jim at the age of 37 became President and General Manger a position he held until his retirement in 1996.

Within a year after opening Jim began designing software to computerize all of the functions of the sale, contracting with a local software company, and after only one year, the Market  went from fully manual to completely computerized in one day, a day that Jim says he would like to forget .

In 1975 he conducted the first video satellite sale of livestock ever held in North America in partnership with Brian and Lee Nielsen from their Market in Clyde Alberta. Under Jim’s leadership, the company continued to expand its video sales and launched a weekly sale of finished cattle by video.

By 1980 Jim was doing a lot of thinking about what the key functions of Auction Markets really were. They receive cattle,  they sort them, and then  present all of the information they can to the buyers; they  disseminate market information and intelligence but the core function is competitive price discovery.  In other words:  exposing producers’ cattle to the largest possible audience of buyers. With this in mind Jim believed that there may be an additional way that Markets could expand their business using new technology.

Along with some  colleagues, Jim  travelled to Texas AM and Virginia Poly Tech University where some early work had been done in Electronic Marketing but had not been successful in commercializing the technology.

Jim came back from that research trip determined to start designing software for an electronic auction of livestock, but found that persuading his seven  partners was not going to be easy. The partners feared that the company would simply cannibalize existing business. Ever the visionary, Jim was able to convince them that showing leadership and presenting new technology would not only attract new customers to the Electronic Market, but also to the live auction ring. As a result, in  1981, Ontario Livestock Exchange launched the first active Electronic Auction for finished cattle in North America and in 1984 a feeder hog auction was added. .
The results are history:  volumes through the live ring grew along with new volumes on the Electronic Auction.

In 1985 TEAM was launched which was a franchise across Canada of the Electronic Auction system selling finished cattle and feeder cattle. Calgary Stockyards was the first franchise.

In 1989 Jim sold a software package to EASE in Scotland and assisted that firm in a successful launch of franchises across the U.K. Jim traveled extensively across the UK and did several week long speaking tours promoting the merits of the Electronic Auction to producers, auction markets, meat processors and super market executives.

In an effort to move into the U.S. market, OLEX purchased a one third interest in National Electronic Marketing Inc.( NEMI), with partners from Texas and Wisconsin. At the time, NEMI  was doing some limited electronic marketing for sheep and hogs . Following the purchase Jim was elected President of NEMI.. After two years OLEX purchased all of the shares of the company and developed a new electronic software package that was PC based and operated it as a service company for Auction Markets who wanted to get into Electronic Marketing. One of its customers used the software in conjunction with satellite video auctions.

AGMEX in South Africa was NEMI’s first customer. AGMEX had sold both livestock and grain and was  developing a market for beef carcasses and cars. Jim spend a month in South Africa and Namibia training Auction Market staff and speaking to producer groups. While there Jim was the keynote speaker at the South Africa Auction Markets and Meat Congress meeting in Durban.

As well, Jim spent three weeks as the guest of the Argentinian Minister of Agriculture and travelled extensively throughout Argentina speaking to producer groups, meat packers and Government representatives.

Jim also travelled to Warnembool, Australia, to be the  keynote speaker at the Australian Auction Markets annual meeting.

Jim Wideman has been the creative mind and driving force behind all of these systems, and was the world leader in Electronic and Video Satellite Auctions. He traveled extensively and did marketing presentations in eight Provinces in Canada, sixteen Sates in the U.S., five counties in Europe, South Africa, Namibia, Argentina and Australia.

Jim was a founding member of Livestock Markets Association of Canada and served on its first Board of Directors, including a two-year term as President. Under Jims leadership, LMAC developed the Good Handling of Livestock video and  materials.. Jim  served continuously on the Board until he took on the role of Secretary. His service with LMAC spans more than 45 years.

Jim is passionate about the Auction method of selling livestock and other agricultural commodities,  whether it  be through the live or electronic auction ring. He believes that it has proven to be  the market price setter and brings the highest net return for the producer.

Throughout his adult life, Jim followed his fathers example and served his community, starting with five years on Wellesley Township Council. He was then elected as Trustee to the Waterloo Regional School Board and served for six years, one year as board chair. He has served for eight years on the Grand River hospital board, ten years as the Canadian representative on the Board of Governors of Goshen College in Indiana and is in his third year on the Board of Governors of Wilfred Laurier University. Jim is currently in his thirteenth year as a councilor for the Regional Municipality of Waterloo where he serves as Chair of the Planning and Works Committee. Jim has been involved in a wide variety of charitable and church organizations including be a founding Board member of MADD Canada.

Since retirement from the Auction business Jim has stayed involved in the livestock industry in his role as CEO and Program Manger of the Ontario Beef Cattle Financial Protection Program for the last fifteen years. This is a Government /Industry program that licenses all buyers of livestock in Ontario and has an assurance fund that protects sellers of livestock in the Province. 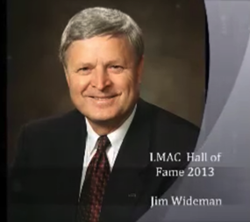