Ken Hurlburt is one of those people who make a difference - to his family, to his profession and to his country. He is highly skilled at what he does; he has a great affection for people, an engaging sense of humor and an infectious laugh. His diplomatic and marketing skills are exemplary.

Ken was born in Lethbridge, Alberta in 1928 and grew up in Milk River. No stranger to hard work, he was picking up odd jobs as early as seven years old.
In the forties, the concept of selling livestock by auction was gaining popularity and the drover’s era was coming to an end. Ken and a partner formed their own cattle buying company, bought an old truck and worked the country, buying one cow at a time.

In 1952 foot and mouth disease struck, and the industry was in crisis. Determined, Ken set his sights on a new career and enrolled in auction school at Western College of Auctioneering in Billings, Montana.
Word of Ken’s talent spread quickly. He sold for Calgary Public Stockyards Mondays through Thursdays, for Pincher Creek Community Auctions on Fridays and Medicine Hat and Walsh on Saturdays. He was asked to consult with the St. Boniface, Manitoba Stockyards (in those years, the largest in the British Commonwealth).  They operated six concurrent sales rings and to help turn their rebuilt but struggling auction facilities around, Ken commuted by train from Alberta for two years.

Ken pioneered the concept selling of land by auction in Alberta; over 50 years ago, he sold 26 sections of land near Foremost by auction.

He has sold such prestigious sales as the Royal Winter Fairin Toronto, North America’s Largest Bull Salein Calgary, and the Pacific National Exhibitionin Vancouver where he sold the record high priced Angus bull at $10,000 for E.P. Taylor.

Along with two partners, Ken opened Fort Macleod Auction Market Ltd. September 13, 1960.  To quote Ken:  “We were merchandisers and we catered. We did what we had to do to keep business in our sale ring. Inside staff moved outside after sales until the last animal had been safely loaded. Our market was warm, clean and provided an attractive place for producers and buyers to do business...”

“...we are proud to be associated with you......your principles of honesty, integrity and your dedication to providing the livestock producers of Canada with the best service available are the foundation of our Company...” The Staff - Fort Macleod-Highwood Auction Company

In addition to his busy career, Ken served as Mayor of Fort Macleod, Alberta and as the Conservative Member of Parliament for the Lethbridge, Alberta riding.

“... Ken Hurlburt has been a cornerstone of the Fort Macleod area, building a solid reputation as a trustworthy livestock producer and a civic minded person devoted to his community...”Walter Paszkowski, Former Alberta Minister of Agriculture

Today, Ken is 84, and he and ReNée live in Fort Macleod - the home of the family ranch - where they are joyfully immersed in the activities of their six children, twenty grandchildren and twenty-three great grandchildren. 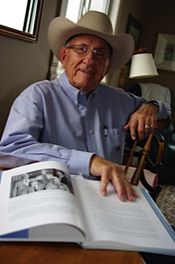