In the 1970’s, Larry Witzel was hired as a part-time employee of Ontario Livestock Exchange (OLEX) in Waterloo, Ontario. Here, he was responsible for receiving hogs and chasing them to the auction ring. Meanwhile, back on the beef and hog farm where he grew up, he practiced his auctioneering skills behind the barn.

After being given the chance to auction hogs at the market itself, Larry was hired to sell cattle for OLEX and Brussels Livestock. Then, in 1979, Jim Wideman hired him full-time as an auctioneer, sales representative, and assistant with the producer-financing program at OLEX.  Sales grew throughout the following years with the growing use of electronic cattle and hog auctions, and Heartland Livestock satellite sales. The latter particularly increased the movement of western feeders to Ontario.

Twenty-five years later, Jim Wideman left OLEX to pursue a career with the Government of Ontario and the Region of Waterloo’s Council. Larry became the General Manager of OLEX at this time. Two years later, he became the President when he, Ross Shantz, and Bill McComb purchased OLEX and B&M Stockers & Feeders from Mercedes.  Then, in 2007, Ross retired from the livestock business and Bill McComb left the company to operate his own order-buying firm.

Over the years, OLEX has grown to become the largest auction market in Ontario. Today, it markets approximately 150,000 cattle, 100,000 sheep, lambs, and goats, and 2,500 horses per year.  Purebred dairy sales and Dutch-harness horse sales have also been a feature of OLEX sales.

Larry has been heavily involved with market associations throughout his time in the industry. For many years, he has been on the Livestock Market Association of Canada (LMAC) Board of Directors, serving as President between 2002 and 2004.  Along with Rick Wright, he has also been an LMAC Industry Government Advisory Committee (IGAC) representative since IGAC began. This committee has built a good relationship between the federal government and the livestock industry, and these two sectors continue to work together towards the implementation of the National Livestock Traceability System. Additionally, Larry is a member of the Cattle Implementation Plan (CIP) committee that continues to create a plan for animal and premise identification, as well as movement reporting, for the National Traceability System. Provincially, he currently serves as President of the Ontario Auction Markets (OLAMA) and as First Vice President of the Ontario Beef Financial Protection Board. In these roles, he sits on the board that reviews claims for non-payment of cattle in the province.

Larry and his wife Marianne continue to live on the family farm in southwestern Ontario. He has four grown children and five grandsons. 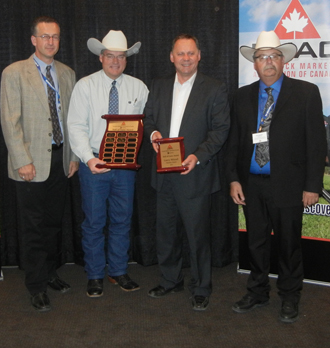