Wright, whose name is synonymous with the livestock marketing industry in Manitoba, was nominated for this national award by Manitoba Livestock Marketing Association members Brock Taylor from Reston and Scott Anderson of Winnipeg.

Wright was recognized for his work on improving the livestock marketing industry on both the provincial and national levels.

Wright has been on the LMAC board of directors for over 25 years. He served as LMAC president from 1996 to 1998 In February of this year he was appointed to the position of Executive Secretary for the LMAC and was re-elected as a director-at-large at this year’s annual meeting.

Wright has been the marketing industry’s representative on the Canadian Cattle Identification Agency for the past eight years. He was the chair of a two- year, $2 million auction mart research project on traceability. He led an industry delegation to Australia to research and to assess the Australian traceability system and its possible use in Canada. He currently chairs the CCIA enforcement and compliance committee that works with CFIA on industry related issues. Wright sits on a number of committees including the Cattle Implementation Committee, Cattle Movement Reporting Committee, as well as committees that deal with Humane Livestock Handling, Transportation and Market Development.

Provincially, Wright has been the driving force behind the Manitoba Livestock Marketing Association for nearly 30 years. He served as President for over 10 years and is currently the Administrator of the Provincial Association.

Mike Fleury, LMAC Hall of Fame chairman from Saskatoon, said, “Wright has dedicated his life to the promotion of the livestock marketing and production industry. He is certainly a deserving inductee.” 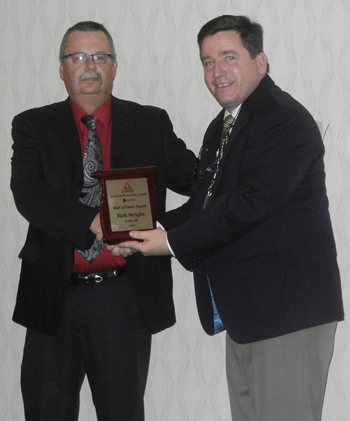