Visionary, Pioneer, Industry Leader: all three words could be used to describe this year's Hall of Fame winner: Ralph Vold.
Ralph was born Dec.3,1930, the youngest of 4 boys. He was raised in the Ponoka area, and even though his many journeys took him many places, he home has always been Ponoka. He is the 3rd generation of Volds to be involved in the Canadian livestock industry: his grandfather Andrew Vold moved his family to the Ponoka area from Oaks, North Dakota in 1896 and was involved in both producing and selling horses and cattle. In 1903 he was killed in an untimely accident, leaving his oldest son, 14-year old Nansen ( Ralphs father) as the man in charge. Nansen continued the family business and added Auctioneer to his skills.

Ralph took his schooling in Red Deer through to Grade 10. Even though the livestock industry was in his blood, he was also a gifted athelete: from 1949-51 Ralph played defense for the Crows Nest Pass Lions of the WHL. 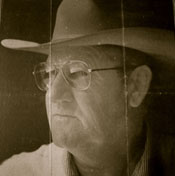