Roy's contributions to the Canadian cattle industry and the auction market system span decades. As a visionary entrepreneur who saw the merits of presorted calf sales; as an award winning auctioneer and respected auctioneering judge; as a preferred speaker at provincial and national events; as a prolific columnist and natural teacher; as a rancher and rider; Roy is most deserving of this award.

Growing up on an Alberta ranch marked the beginning of a career that has made Roy Rutledge a familiar name in the Canadian livestock sector. Inheriting his love of cattle and horses, along with his ranching skills from his father and grandfather, Roy has dedicated his life to the industry. Always an enthusiastic supporter of many community groups to judging at the prestigious Calgary Stampede, Roy has travelled extensively throughout Western Canada in response to countless invitations to speak, teach, judge , auctioneer and advise

Roy's speaking engagements, teachings and columns have consistently had a common thread - the merits of price discovery and the value of the auction system to livestock producers. He is always willing to call or attend a meeting where he could promote the auction marketing industry and contribute in a positive way.

After a stint breaking horses at the famous Matador Ranch in western Saskatchewan, Roy gained experience working at the Cereal Auction Market and later with Terry Schetzsle at the Veteran Auction Market in Alberta. Roy moved to Saskatchewan in 1985 when he and his wife Debbie purchased the Assiniboia Auction Market. Since then, the business has grown into one of the largest, Most service-oriented auction markets in Canada. It was here that Roy's vision for pre-sorted calf sales was implemented; a system that has since been adopted by many other auction markets.

A man of integrity, always eager to help, Roy is most worthy for induction to the LMAC Hall of Fame. Whether he is pursuing a goal through an innovative marketing system or his compelling columns and inspiring speeches, Roy always considers the greater good. Selfless and energetic, Roy is a tribute to the Canadian livestock industry. 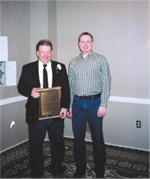