2014 LMAC convention was an outstanding success with over 150 market operators, order buyers, auctioneers and industry partners in attendance from B.C. to Quebec. The event was hosted by the Livestock Marketers of Saskatchewan with the convention central in Regina and the Canadian Livestock Auctioneering Championships at Canada oldest operating auction market at Moose Jaw. This year saw a Master’s Competition added for the past champions which drew 8 of the 16 LMAC past champions.

The convention started off with a very successful, meet and greet evening at the hotel, which included the auctioneers draw and Calcutta. Friday morning opened with a Board of Directors meeting, auctioneers meeting and breakfast. The buses rolled out to Moose Jaw with 27 auctioneers competing for the LMAC championships.This year the Man/Sask auctioneering championships were held in conjunction with the LMAC event.

After the competition a barbeque was held at the Red Barn and some of the auctioneers showcased their karaoke talents for the crowd.

Saturday opened with the business meeting. The general meeting consisted of financial reports and reports from various committees. In the general business meeting an election was held to fill three of the open directors at large positions on the Board of Directors. The membership was given the opportunity to nominate. Myles Masson from Ste. Rose, Manitoba; Brock Taylor from Melita Manitoba; Steve Spratt from Ottawa, Rick Wright from Manitoba and Bryan Danard from Calgary were nominated. After three rounds of voting by the membership, Rick Wright, Bryan Danard and Brock Taylor were elected to the board of directors for a 2 year term. Rick Wright was approved and appointed by the membership to position of Executive Secretary.

In the educational session Joe Jackson of JGL livestock gave a very positive presentation on the cattle futures and his outlook for the fall and spring prices. Veronica McGuire, Executive Director for Program, Regulatory and Trade Policy with the Canadian Food Inspection Agency gave the audience a review of the regulatory process and how organizations such as LMAC can make their suggestions and concerns known. Mr. Eric Aubin, of CFIA discussed proposed regulatory changes that will have an affect on the livestock-marketing sector. Both speakers addressed questions from the floor. Various members expressed concern over the CFIA’s wish to scan individual animals at auction markets and buying stations. Pat Hayes from the Canadian Cattlemen’s Assoc. and Dr. Pat Burrage, chairman, of the Canadian Cattle Identification Agency both spoke in support of LMAC on this issue. Other presentations were given by Mr. Ted Powers from Veiwtrak and Yves Gervais from Reference Systems, on software technology that may assist markets with movement reporting requirements in the future.

In the afternoon a large delegation toured the RCMP training depot in Regina. That evening was the awards banquet. After a video presentation of the auctioneers, and some candid shots of many of the conventioneers the awards were presented after supper.

In the open auctioneering event Shawn Gist from Fort Saskatchewan, Alberta was declared the winner and was awarded the Canadian Angus Buckle, from Brian Good as Grand Champion. Gist a long time competitor sells for the VJV network, out of Dawson Creek B.C. Runner up was Kirk Goldsmith of Veteran Ab., who sells for the Dryland Cattle Trading Corp. Goldsmith was awarded the Canadian Hereford Buckle, by Doug Manns for Reserve Champion. Third place was Rob Bergevin, owner operator of Foothills Auctioneers at Stavely Alberta. Bergevin was presented the Canadian Limousin buckle by Terry Hepper. Fourth place went all the way to Waterloo Ont., Kelvin Kuepfer who sells at the Ontario Livestock Exchange won the Canadian Simmental buckle presented by Kelly Richardson. Rounding out the top five was Garth Rogers of Rochester, Ab., he was awarded the Canadian Charolias Buckle, presented John Mielhausen . Judges for the competition were Chance Martin from Red Deer Alberta; Ryan Gibson of Moosejaw Sask; Brian Good from the Canadian Angus Assoc.; Myles Masson from Ste. Rose, Manitoba; Dave Clarke from Dutton Ont; and 2013 LMAC Champion Travis Rogers from Westlock Alberta.

Danny Skeels from Rimby Ab., was selected by the competitors of the open competition as the winner of the Masters competition, edging out Ward Cutler from Virden Mb. Skeels was awarded the “green jacket” by LMS President Bob Blacklock.

Tyler Cronkite from Moose Jaw was recognized by his peers in the competition as the most congenial auctioneer, he was awarded the Jim Raffan Memorial buckle presented by Danny Skeels on behalf o the Raffan family.

Tyler Slawinski from McCreary Manitoba won the Man/Sask championship, he was awarded the Merial Canada buckle and $1000 prize money. Ryan Hurlburt from HLS won the Man/Sask rookie award, he was presented the Bob Wright Memorial award by members of the Wright family.

The Canadian Angus “Stockyards of the Year” award was presented to Perlich Bros. of Lethbridge Alberta. Brian Good made the presentation to Ken Perlich.

The 2014 LMAC Hall of Fame inductee was Rick Wright from Manitoba. Nominated by Scott Anderson and Brock Taylor, Wright has been involved with LMAC for over 30 years continues to represent LMAC on a number of national committees. Mike Fleury from Saskatoon made the presentation and referred to Wright as the face of the Manitoba Livestock Marketing Assoc. across Canada. Wright is a past President of LMAC and has served on the board of director for over 25 years. Other nominees for the Hall of Fame award were Blair Vold from Ponoka Ab.; Larry Witzel from Waterloo Ont.; and Terry Schetzsle from Veteran Ab.

At the end of the awards night, President Ken Perlich thanked the Livestock Marketers of Saskatchewan for hosting the 2014 event and announced that Manitoba Livestock Marketing Assoc. would host the 2015 convention and competition in Winnipeg. 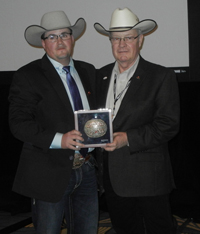 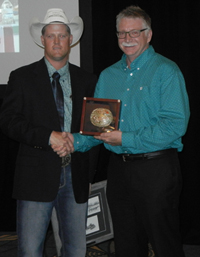 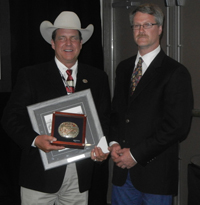 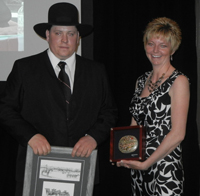 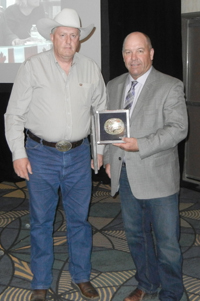 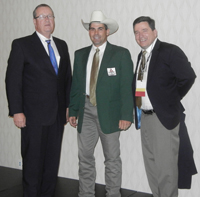