Over 250 auctioneers, auction market operators, order buyers and livestock industry representatives from B.C. to Quebec attended the 38th annual Livestock Markets Assoc. of Canada convention and Livestock Auctioneering Championships in Lethbridge Alberta May 11 to 14. The Host Market for the event was Perlich Bros. Auction Mart Ltd. Bob, Ken, John, Maureen and Stan Perlich along with their families showed the conventioneers hospitality “Alberta Style”.

The convention opened with a “meet and greet” on Thursday along with a LMAC board of directors meeting, auctioneer interviews, auctioneer competition draw, a calcutta. A rum testing and auction was provided courtesy of ViewTrak. All 30 of the auctioneers along with the judges and officials were introduced and were presented jackets from VJV/Canadian Satellite Auctions and a special edition shirt from LMAC.

The 20th annual auction competition was held at Perlich Bros. on Saturday with 3700 head of cattle on offer. Each auctioneer sold 8 drafts of cattle and a black box item in round one. The top ten auctioneers came back for round two and sold 6 drafts. In between round one and round 2, past champions Ross Annett, Chance Martin, Brennin Jack, Dean Edge, Ryan Hurlburt and Rod Burnett sold cattle. LMAC’s first champion and world champion Danny Skeels was master of ceremonies for the competition. The market was very strong and the auctioneers sold the cattle quickly at competitive prices to large selection of buyers. It was agreed that Perlich Bros. gave a clinic on how to run an efficwell run livestock auction.

Friday night wrapped up with a steak supper and live music provided by Perlich Bros. Auction Mart Ltd. The event was in conjunction with Perlich’s 50th anniversary of being in the auction mart business. On Saturday morning the LMAC annual business meeting got under way with “Breakfast with Mike Murphy”. Murphy a market analyst from CattleFax in Denver did a market price outlook for fall and talked about a supply/demand driven market. He touched on US politics and the Trump administration’s livestock policies in the first 100 days of office. In summary his report concluded that the USA is still in an expansion mode and that calf prices for this fall should be similar to last fall. He advised that Canada is one of the USA’s best and biggest customers for beef and beef products and that the US will be looking to expand their exports especially to China, which would a positive for the cattle industry on both sides of the border. He spoke about market volatility and reminded those in attendance that the last time the market peaked in 2014 there was a 13% increase in the prices that year. The latest rally in the cattle market in late April showed a 13% increase in the prices over a 10-day period.

Rick Wright the LMAC representative on the Canadian Cattle Identification Agency gave an update on the Animal Movement and Reporting proposals from the Cattle Implementation Plan. He reported that industry could expect the proposed regulations to be printed in the Canada Gazette in late 2017 or early 2018. After the regulations come into effect then industry will have three years to prove to CFIA that group movement reporting will provide CFIA enough information for trace backs without individual scanning of animals at auctions and assembly yards.

He also reported that the University of Calgary has been hired to conduct a review of both the CIP plan and the Epi study conducted by CFIA as well as a cost analyst of equipping the industry for both individual scanning and group movement reporting. The study will cost approximately $80,000.00 and industry has commitments of $57,000.00 to date. LMAC has committed $5000.00 to the study. Ted Power announced that ViewTrak would commit $2500.00 to the study. Dave Lehman from Allfex also committed $1000.00 to the fund.

Virgil Lowe from the Verified Beef Program spoke to the membership about the program and how auction markets and buyers can use the program to get their customers value add for their calves. Some of the members were concerned that CCA could promote this to move more cattle to direct sales and away from the public auction markets.

In the business portion of the meeting Rob Bergevin was elected to President for a two-year term. Rick Wright was re-appointed as the LMAC Administrator. There were three directors at large positions available this year. There were five nominations from the floor, Jim Abel from Stettler Ab.; Allan Munroe from Killarney Mb; Craig Jacklin from Ponoka Ab; Brock Taylor from Reston Mb.; and Kevin McArter from Brussels Ont.

The afternoon session was a feedlot tour of “Alberta’s Feedlot Alley”. A traditional Mexican dinner was served at VRP Farms Ltd. Owner Rick Paskel and staff gave a tour of their 157,000 head feeding operation and explained many areas of their operation. Over 100 took part in the tour.

The women’s program consisted of a luncheon and a fun afternoon at the racetrack organized by Maureen Perlich complete with fancy hats, scarves and sunglasses. A record participation of over 50 ladies enjoyed the afternoon session.

The evening awards banquet brought the convention to an end. There were many presentations at the banquet. Danny Skeels was awarded the LMAC Industry Champion award for his many years of promoting LMAC and marketing business. He was the first LMAC Champion and has mentored many champions.

Blair Vold, from VJV Ponoka joined his father Ralph in the LMAC Hall of Fame as the inductee for 2017. Other nominees included Stewart Stone, Ron Northcott and John Milne.

The following awards were presented:

More information on the Auction Competition is available on the LMAC website. It was announced that the convention next year would be held in Moosomin Saskatchewan and the Auction Competition at Whitewood Livestock Sales May 10 -13 2017. LMAC and it members would like to thank Perlich Bros. on hosting one of the best conventions ever. The hospitality was outstanding. Those in attendance made friendships and memories that will last a lifetime. Many businesses claim to be number one, but Perlich Bros. showed the rest of country that they are without a doubt “number one” in southern Alberta. 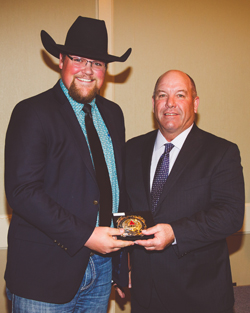 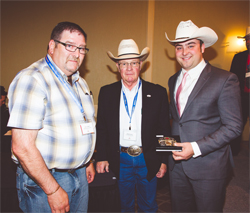 Bob Toner and Brian Good from the Canadian Angus Association present Ab Carroll from the Ontario Stockyards Inc. at Cookstown Ont. with the 3rd place buckle. 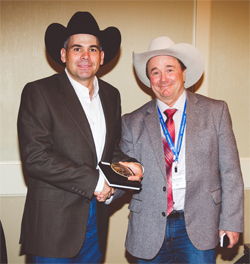 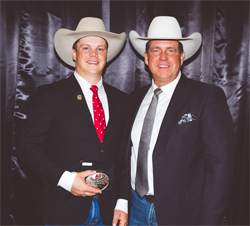 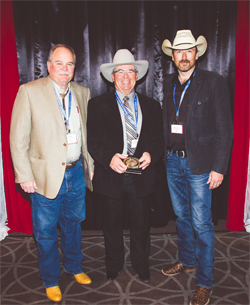 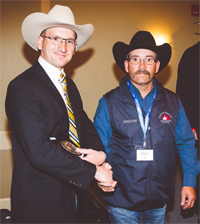 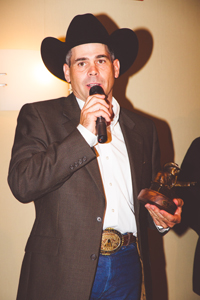 Danny Skeels, from VJV Ponoka, was presented with the Champion’s Bronze as the ” Industry Champion Award” for his volunteer work at LMAC, his promotion of the “Price Discovery by Public Auction and his mentorship of young auctioneers. 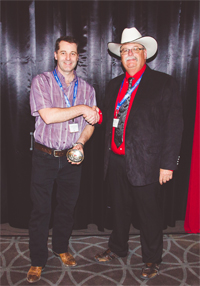 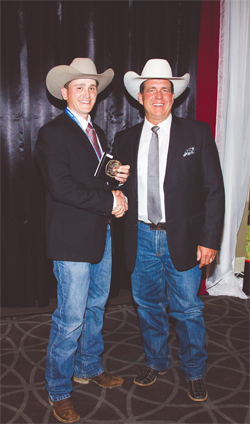 The People in attendance voted on their favourite auctioneer Joe Perlich from Perlich Bros. was the 2017 winner. 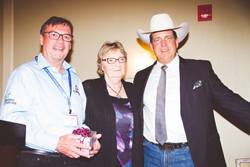 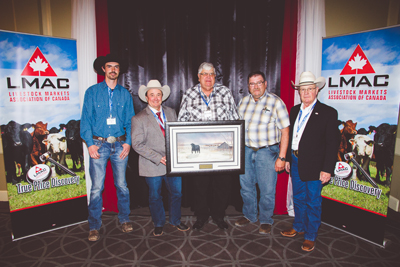