Thursday evening opened with the Ontario Meet and Greet evening at the Oakwood Resort. LMAC conventioneers were treated to a great meal featuring beef from the Ontario Corn Fed program. After the auctioneers draw and interviews, Ross Annett and Mike Fleury auctioned off the Calcutta teams. Each auctioneer received a jacket compliments of the Canadian Satellite Auction, and a dress shirt from LMAC.
Earlier in the day the Board of Directors held their meeting. Sid Atkinson representing the Dairy Farmers of Canada made a presentation to the LMAC voicing concerns from the dairy sector on cull cows and dairy calves that are marketed through the auction system. The discussion was very open and useful for both parties, and it was agreed that the two organizations should work closely together on common concerns and industry issues. Mark Burgham attended the meeting on behalf of CFIA to discuss the proposed regulatory changes. LMAC reinforced their support of the Cattle Implementation Plan and made it very clear that they did not support mandatory scanning of livestock arriving at the auctions. The proposed changes were reviewed, and Mark also reviewed the progress that had been made to date on the file, and highlighted outstanding issues.

On Friday morning, 29 auctioneers from Alberta to Quebec arrived at Brussels Livestock for the Canadian Livestock Auctioneering Championships. Mark and Cindy Ferraro and their family, the owners of Brussels Livestock were fantastic hosts all weekend. The auctioneers had over 2200 cattle to sell. Each auctioneer was given nine drafts of cattle and one black box to auction, with the top ten returning for the Championship Round. This year’s judges were 2015 Champion, Calvin Kuepfer from Newton, ON, Bob Miller Sr. from Kamloops, Craig Jacklin from Ponoka, Bob Perlich from Lethbridge, Ross Annett from Brooks, and Jeff McSherry from Teulon, MB. This year, the master of ceremonies was former LMAC President Mike Fleury from Saskatoon. The auction competition drew a huge crowd with over 500 people watching at the market, along with 500 viewers on TEAM, and an additional 300 viewers on the DLMS network. DLMS posted footage of the event on the Internet, which attracted over 1000 viewers within 48 hours of the event. The business meeting was well attended on Saturday morning. President Scott Anderson welcomed everyone to the event. Rick Wright and Bryan Danard were re-elected for 2-year terms as directors-at-large to the LMAC board.

Rick Wright, the LMAC representative on CCIA, gave a presentation on the Cattle Implementation Plan and an update on the traceability file. He explained in detail the LMAC’s position on traceability and the proposed regulatory changes. There was a lot of discussion from the membership, and the clear consensus was to continue to the current path of full support for the CIP plan. John Masswell from the CCA, Mark Elford, president of CCIA, and Ross McCall, President of the National Order Buyers Association, formed a discussion panel and informed LMAC members about their organization’s policies and positions on the traceability file. There were many questions and opinions offered by the membership and the panel members. It was agreed that all of the organizations should continue to work together on this industry issue and that the Canadian Cattlemen’s Association should take the lead with the support of other industry groups. Brian Perlliat from CanFax gave a detailed market outlook for the fall cattle prices. His predictions were that there would be further declines in the cattle prices, with the value of wet nosed calves declining the most in the fall of 2016. Both Xcira and Viewtrak gave presentations on technology updates and software programs available for auction markets and order buying programs. Later in in the meeting, LMAC members discussed other issues related to the operation of running an auction market. The major concerns discussed included over regulation by government, electronic marketing, declining cattle numbers and a shortage of skilled labour.

After lunch, LMAC members took part in a number of activities including a tour of a local feedlot, a tour of Ice Cultures at Hensall or golfing at the resort. Later that evening, nearly 300 people attended the awards banquet. This was the first time that the awards night was broadcast live on the DLMS network. Over 300 tuned in to watch the awards program.

Ryan Hurlburt from Saskatoon Livestock Sales was crowned the 2016 Canadian Livestock Auctioneering Champion. He was awarded the Canadian Limousin Association buckle by Limo representative Bill Zwanbag, the use of an EBY trailer for one year courtesy of EBY trailers and T-Down Trailer sales (Ross Annett), $1200 cash from LMAC and a Championship Ring from Foothills Auctioneers Inc. from Stavely, Alberta. The Canadian Shorthorn Association awarded him a limited edition Ken Fredrickson “bronze auctioneer.” Dale Asser was on hand to make the presentation. 2016 Reserve Champion was won by Kirk Goldsmith from the Dryland Cattle Trading Corp in Veteran, Alberta. He was presented with the Canadian Simmental Association buckle by CSA general manager Bruce Holmquist. Third place was awarded to Southern Alberta Livestock Exchange’s, Ryan Konynenbelt. He was presented with the Canadian Charolais Association buckle by John Mielhausen. 4th place buckle this year was sponsored by the Canadian Angus Association. Brian Good and Cheryl Hazenberg presented the Angus buckle to Ab Carroll from the Ontario Stockyards Inc. at Cookstown. Rounding out the top five was Manitoba’s Tyler Slawinski from the Gladstone Auction Mart. Dr. Wally Pugh presented him the Canadian Hereford Association buckle.

The Merial Canada Rookie of the year award went to Ryan Konynenbelt from Alberta. The “Jim Raffan Memorial Award” for the most congenial auctioneer is voted on by the auctioneers competing in the competition. This prestigious award was presented by Bob Miller Sr. on behalf of the Raffan family from Valley Auctions to Kevin McArter from Brussels, Ontario.

This year a new award was developed for the most improved auctioneer. This award is open to any auctioneer who competed in last year’s championship. Heartland Order Buying Company from Manitoba sponsored the award. Rick Wright, manager of HOBC, presented the buckle to Jordie Waters representing Foothills Auctioneers Inc. from Stavely and VJV at Ponoka.

The Canadian Angus Association Stockyards of the Year award was presented to The Cowtown Livestock Exchange at Maple Creek, Saskatchewan. Cowtown manager Tyler Kronkhite accepted the award from Brian Good and Cheryl Hazenberg.

The 5 Breed Associations presented the Brussel’s Livestock owners and staff with a token of thanks for hosting the competition. Bruce Holmquist made the presentation on behalf of the Simmentals, Herefords, Limousin, Charolais and Angus Associations. It was a great night for the representatives of Saskatoon Livestock Sales. SLS general manager and co-owner Mike Fleury was inducted into the LMAC Hall of Fame. Fleury, a past LMAC president, was the 6th inductee into the Hall of Fame. He was recognized for his extraordinary contributions to the Canadian livestock marketing industry and the promotion of the auction method of price discovery.

Attendees were treated to a number of video presentations during the evening featuring LMAC members, auctioneers and the people behind the scenes.

The 2016 LMAC convention was a huge success with outstanding support from both local and national sponsors. A special thanks goes out to the Ferraro Family and the staff at Brussels Livestock for hosting an exceptional conference. Also a big thank you to staff at the Oakwood Resort for the great customer service during our convention.

Next year, the LMAC convention and auctioneer championship will be held at Perlich Bros. Auction in Lethbridge, Alberta, May 11 -14, 2017. 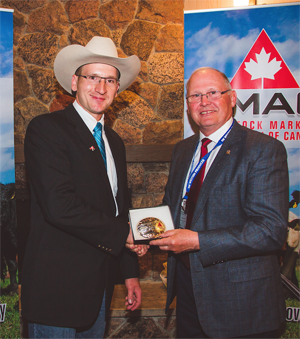 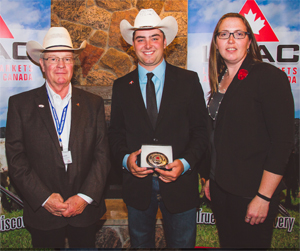 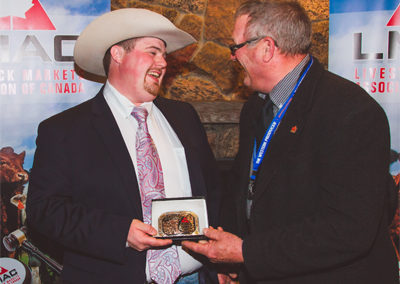 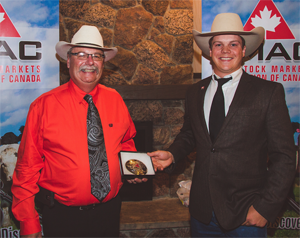 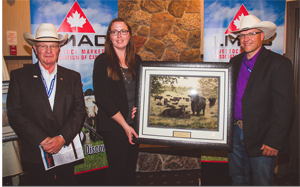 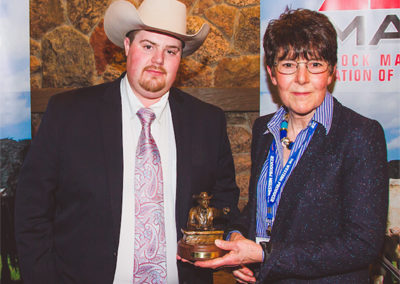 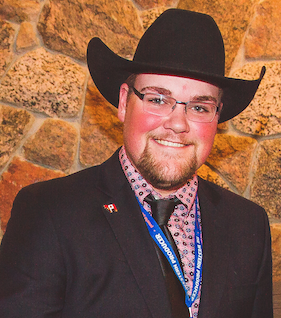 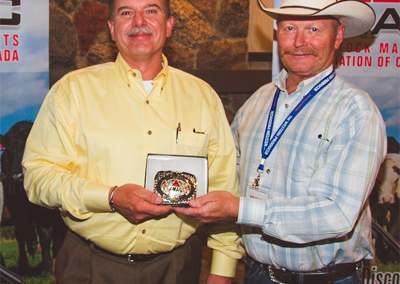 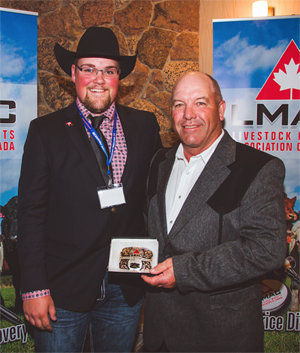 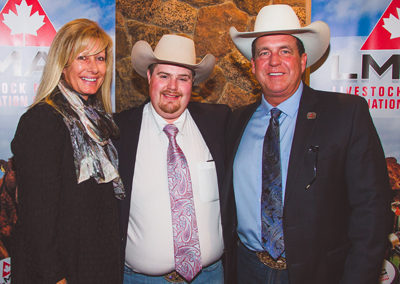 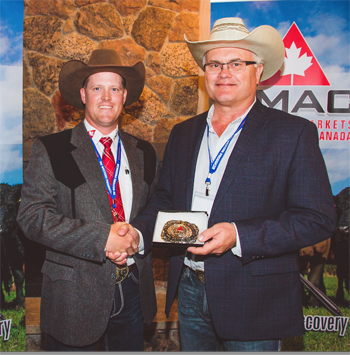 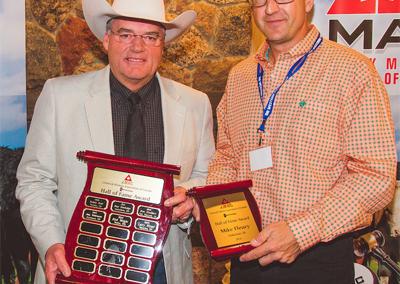