Auction Market operators, order-buyers, industry partners and service providers gathered in Moosomin, Saskatchewan in May for the Livestock Markets Association of Canada’s annual convention and auctioneer championships. This was the first time in recent years that convention central was not in a major city. The Parks family and Whitewood Livestock Sales were the hosts for this year’s event. Over 250 people registered for the convention.

The convention opened with the LMAC Board of Directors’ meeting on Thursday morning. A “meet and greet” followed on Thursday evening, along with the auctioneer video interviews, auctioneer competition draw, and a record-breaking calcutta. The 35 auctioneers, along with the judges and officials, were introduced and were presented with sweaters from VJV/Canadian Satellite Auctions and a special edition shirt from LMAC and Wrangler, LMAC’s official supplier of shirts. The 21st annual auction competition was held at Whitewood Livestock Sales on Saturday.

This year, the Man/Sask auctioneering championships were held in conjunction with the LMAC event. The day opened with a western breakfast at the market. Over 1500 head of cattle were consigned for the sale. New to this year’s competition was the personal interview conducted by a panel of three LMAC judges. The personal interview accounted for 20% of the final score on the first round. Each auctioneer sold eight drafts of cattle and a black box item in round one. The top ten auctioneers came back for round two and sold six drafts. 2002 LMAC Champion Desmond Plewman was master of ceremonies for the competition. This event attracted the largest number of buyers ever to assemble at Whitewood. Buyers came from B.C. through to Ontario, making the sale very successful. A pitchfork barbeque and live entertainment at the Moosomin Sportsplex capped off the official events on Friday evening.

Many of the conventioneers took advantage of the LMAC hospitality room at the hotel during the weekend. On Saturday morning, the LMAC annual business meeting got under way with breakfast and a review of the annual report. This year featured two guest speakers. Corbitt Wall, who works as a commercial cattle manager for DV Auctions in the United States gave a very interesting presentation on the US cattle market and the current political atmosphere in the US cattle industry. He touched on packer consolidation and market competitiveness. He reminded the conventioneers about the importance of the auction markets and the role they play. He talked about Donald Trump and his impact on agriculture and trade. Wall does a daily market report and analyses on the Internet called “Feeder Flash,” and his Canadian following will increase greatly after his presentation. His presentation style was very popular with the audience. He shoots from the hip and tells it like it is. His history as a government market reporter, cattle producer and auction market supporter gave him instant credibility with the LMAC members.

A devout Trump supporter, Wall’s presentation was both informative and entertaining. Many of those attending mentioned that he might have been one of the best presenters ever at an LMAC convention. Also in attendance were representatives from Livestock Markets Association based in the USA. This was the first time in over 15 years since there have been representation from the LMAC American counterparts. President Bergevin welcomed the two representatives and expressed LMAC’s desire to reopen channels of discussion and cooperation between the two organizations.

The second speaker was Craig Klemmer from Farm Credit Canada. FCC is the biggest financier of cattle and agriculture in Canada. Klemmer spoke on the future of the Canadian cattle industry. He also touched on how FCC determines leading levels for feeder cattle and bred stock. Although he suggested caution for the next couple of years, his presentation was bullish overall on the cattle industry. Rick Wright advised the group that despite an aggressive campaign from LMAC for an extension, he had timed out as the LMAC representative on the Canadian Cattle Identification Agency. President Rob Bergevin had attended the CCIA annual meeting in April to present LMAC’s wish to have Wright remain on the CCIA board until after the implementation of the new movement reporting regulations. 80% approval was required by the CCIA board of directors, and despite having a majority in favour of the LMAC motion, the two motions were each defeated by a single vote. Rick advised that LMAC would need to appoint a new representative by September of 2018.

Wright reported that the proposed regulations had been delayed and were now expected to be printed in the Canada Gazette in early 2019, followed by a 70-day comment period. After the regulations come into effect, industry will have three years to prove to CFIA that group movement reporting will provide CFIA with enough information for trace backs without individual scanning of animals at auctions and assembly yards. He also reported that the University of Calgary’s a review of both the CIP plan and the Epi study had been completed. The study recommended that sightings rather than individual animal scanning might be an alternative to meet CFIA’s needs in the future. Wright also complimented the marketing sector for their participation in the study’s industry survey. The marketing sector had the biggest response and supplied the most information to the study. The results of the study are available to the funding groups. In the business portion of the meeting, the membership was informed that the Livestock Marketers of Saskatchewan were three years in arrears on their membership fees. Discussions had been ongoing with LMS, but in the fall of 2017, LMAC had received a letter from LMS informing them that they were withdrawing their membership in LMAC. The LMAC board had no choice but to revoke the Livestock Marketers of Saskatchewan’s member in good standing designation over the outstanding membership fees. The membership was informed that under the LMAC constitution, this would allow individual auction markets, assembly yards and order buyers to join LMAC as independent members with full membership benefits including voting rights. Many of the Saskatchewan markets in attendance expressed an interest in joining.

In other LMAC business, Rick Wright was re-appointed as the LMAC Administrator. Provincial appointments were Mark Canart, BC; Craig Jacklin, AB; Scott Anderson, MB; Larry Witzel, ON. Livestock Marketers of Saskatchewan did not renew their membership. The Saskatchewan position on the LMAC board was converted to a Director at Large position. The membership elected Jason Danard, Kevin McArter, Chance Martin and Rick Wright for 2-year terms as Directors at Large. President Bergevin thanked Bryan Danard, Rhett Parks and Peter Raffan for their dedication and work on the LMAC board of directors. The afternoon session was a feedlot tour of Pipestone Feeders at Grenfell, Saskatchewan. This 13,000 head feedlot both backgrounds and finishes cattle for NBI. Feedlot manager Kees Kokkee gave a very informative tour which included a number of newly developed protocols for receiving, processing and animal health management for cattle at this feedlot. To date, these protocols have been very successful in reducing death loss and improving feedlot production. Another 40 people took part in an underground tour of the local potash mines, which turned out to be very interesting and informative. The majority of the ladies took part in a “paint and sip” luncheon. A few of the “masterpieces” created at this event were sold at the awards banquet. The evening awards banquet brought the convention to an end.

There were many presentations at the banquet. Gene Parks from Pipestone Livestock and Whitewood Livestock Sales was inducted into the LMAC Hall of Fame as the inductee for 2018. Other nominees included Ron Northcott and Jack McKinnett. The new LMAC Honour Roll inducted three industry icons:

More information on the Auction Competition is available on the LMAC website. LMAC and its members would like to thank the Parks family and the staff at Whitewood for hosting this year’s event. They proved that you don’t have to have this event in a large centre to make the LMAC annual event successful. Local support from the businesses and volunteers was outstanding. LMAC would like to thank our national sponsors and a special thank you to all of the Manitoba and Saskatchewan sponsors who stepped up to help make this event successful. 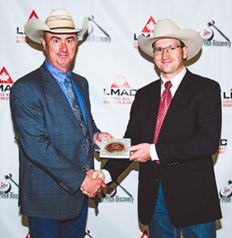 Richard Moellenbeck of the Canadian Shorthorn Association presents Tyler Slawinski from the Gladstone Auction Mart with the 2nd runner up buckle. 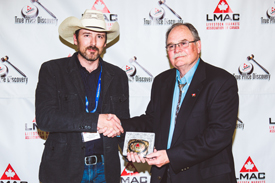 Rhett Parks was the 2018 winner of the Most Congenial Auctioneer Award sponsored by Whitewood Livestock Sales and voted on by the auctioneers competing. Gene Parks makes the presentation. 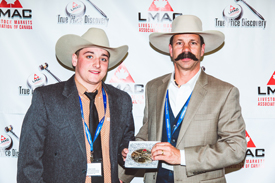 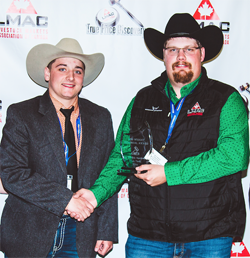 MAN/SASK Rookie of the Year was Brady Olson of Assiniboia Auction Mart, He received the Bob Wright Memorial award presented by Kelly Wright, Bob’s grandson on behalf of the Wright family. 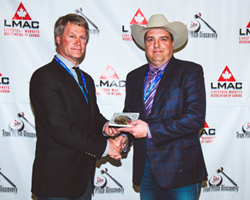 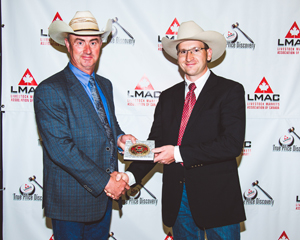 Danny Skeels, from VJV Ponoka, was presented with the Champion’s Bronze as the ” Industry Champion Award” for his volunteer work at LMAC, his promotion of the “Price Discovery by Public Auction and his mentorship of young auctioneers.” 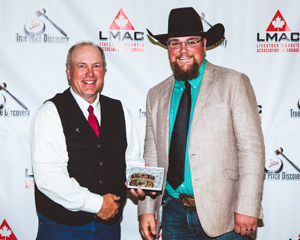 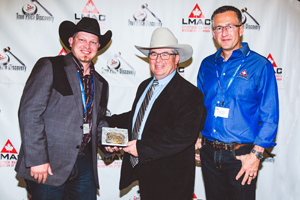 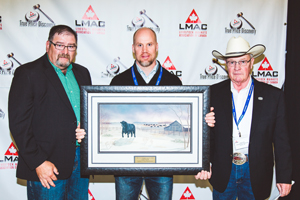 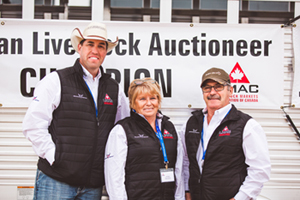 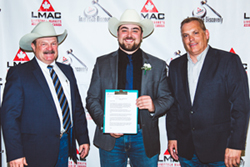 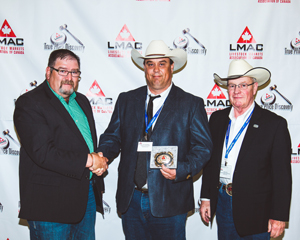 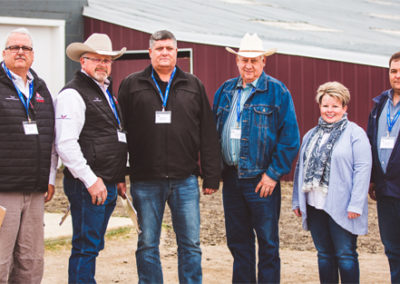 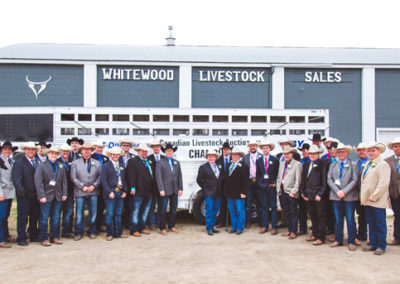