The 35th annual Livestock Markets Association of Canada’s convention was held in Winnipeg, Manitoba May 28 -30. Over 200 conventioneers from across Canada attended the event that was held in conjunction with the Canadian Livestock Auctioneering Championship.

The convention opened with the Board of Directors meeting which centered on a number of topics. Most importantly was a meeting with CFIA and AFAC represents regarding the proposed regulatory changes for movement reporting and traceability. This meeting lasted 3 ½ with another meeting being set for Calgary in Sept.

The opening meet and greet night featured a Manitoba theme, with all of the food and products served coming from Manitoba producers. A record number of sponsors and conventioneers attended the event.

At the Annual meeting the theme for the event was “Sustainability – A Look into the Future”. Ryder Lee from the Canadian Cattlemen’s Assoc. spoke on sustainability, what it is, how will it affect the marketing sector and what are the challenges for the future.

Stirling Fox from JBS Foods Canada, talked about sustainability from the packer perspective. He also talked about the importance of traceability from the processing business. During the question answer he also gave his personal opinion on whether the current cattle prices were sustainable. Fox’s “direct, shoot from the hip” presentation was well received from those in attendance. Jerry Klassen an independent market analyst gave a very informative market outlook for the fall of 2015 and spring of 2016. He spoke about fundamentals that change the market and demand for beef and beef products. He also touched on changing consumer demands.

Ted Power and his “ViewTrak Team” gave a very enthusiastic presentation on the BIX-ViewTrak agreement along with an update on the development of software to accommodate movement reporting requirements in the new proposed regulations. They were very clear that ViewTrak has no intentions to market cattle through the BIX program in direct competition to the markets and buyers. In the business meeting Scott Anderson of Winnipeg Livestock sales was elected as President of LMAC. The position of Vice-President will be appointed by the board of directors at a later date. Rick Wright was reappointed to the position of Executive Director. There were 3 openings on the board of directors for director at large positions. There were 7 nominations for the 3 positions. The membership held an election with Brock Taylor from Melita, Mb. Jim Able from Stettler Ab. and Kevin Mcarter from Brussels Ontario elected to the LMAC board of directors for 2 year terms. The membership also voted to approve the board of director’s recommendations for the constitution, by-law, travel policy, code of ethics and insurance requirements. All of those changes are included in the annual report.

Brussels Livestock offered to host the auctioneer championship for 2016. The membership approved hosting the convention in Ontario next year. The final details will be worked out between Brussels and the executive. Please refer to the 2015 Annual Report and the 2015 Event Program on this website for complete information on the convention, back ground stories, hall of fame information and a complete list of the auctioneers and judges at the competition.

Calvin Kuepfer who sells at the Ontario Livestock Exchange was the 2015 Canadian Livestock Auctioneer Champion. Kuepfer was the over winner in a field of 30 auctioneers from across Canada. Kuepfer received the Canadian Hereford Assoc. buckle from Albert Rimke, along with a championship ring from Foothills Auctioneers Inc. at Stavely Alberta. For the first time history there was a 3 way tie for Reserve Champion. After using the LMAC tie breaking formulas Mark Angus of the Canadian Limousin Assoc. presented Kevin McArter from Brussels Livestock with the Reserve Champion buckle. Ryan Hurlburt from HLS in Yorkton Sask. picked up third place overall and the Canadian Simmental Assoc. buckle presented by Meghan Black. John Mielhausen from the Canadian Charolais Assoc. presented Albert Carroll from Omee, Ont with the 4th place buckle. Tyler Slawinski from Manitoba rounded out the top five wining the Canadian Angus Assoc. buckled presented by Lois McRae and Brian Good. All top ten finishers were awarded a custom made LAMC hat pin sponsored by the Manitoba Livestock Marketing Assoc. (For a full list of auctioneers and placings please refer to the Auctioneer Champion page on this website.)

The Merial Canada rookie of the year award winner was Albert Carroll from Ont. Allan Munroe from the Killarney Auction Mart in Manitoba was voted the most congenial auctioneer by the 30 auctioneers in the competition. He received the Jim Raffan Memorial award presented by Peter Raffan representing the Raffan family and Valley Auctions in Armstrong B.C. This year’s winner of the Man/Sask champion buckle sponsored by Merial Canada was Ryan Hurlburt from HLS. Yorkton. The Bob Wright memorial award for top Man/Sask rookie went to Morris Olafson from Morden, Manitoba. Throughout the evening the crowd was entertained by various video presentations on LMAC members, auctioneers and industry partners.

This year’s LMAC Hall induction included a large number of nominees from across Canada. (For a complete list and history please refer to the 2015 program included on this website.) This year’s winner was Larry Witzel from Ont. Witzel was nominated by Rick Wright, who has spent over 20 years working on LMAC projects with Larry. Witzel who owns and operates the Ontario Livestock Exchange (OLEX) has been a major contributor to LMAC and the livestock marketing industry serving on many committees and representing the marketing sector at a number of events and meetings. ( More information on Larry Witzel is available on this website on the Hall of Fame page.)

The afternoon session included a very educational visit to the Canadian Human Rights museum in Winnipeg. LMAC would like to thank the host committee and the many volunteers and sponsors that made this convention a huge success. 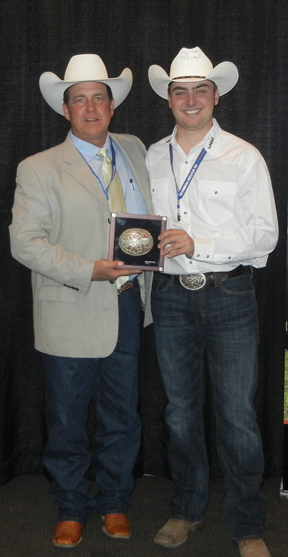 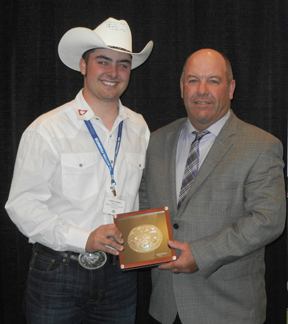 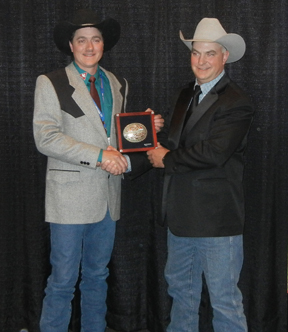 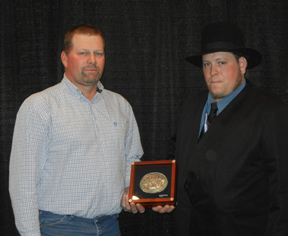 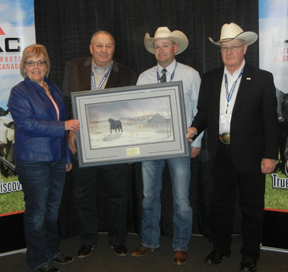 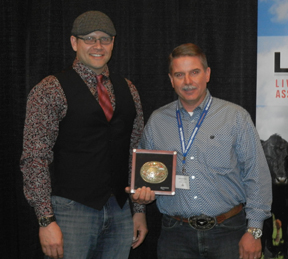 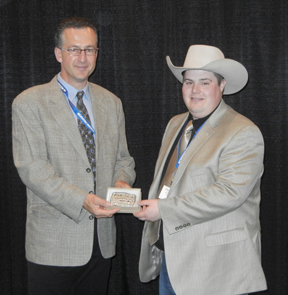 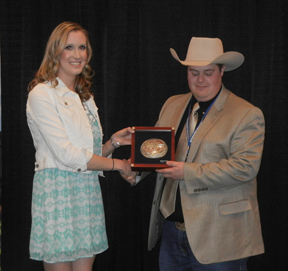 Ryan Hurlburt winner of the Can. Simmental Assoc. Buckle 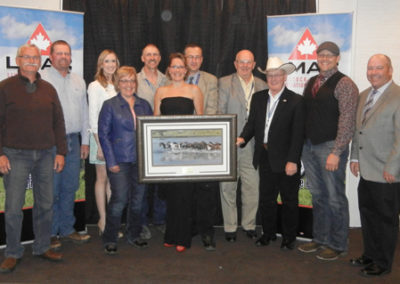 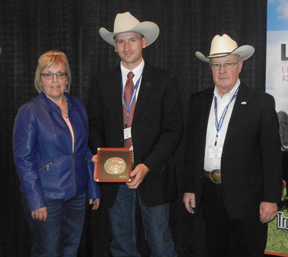